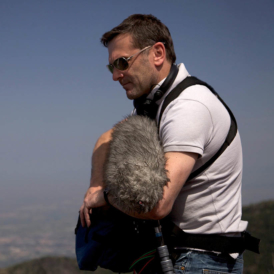 Paul has been working in broadcast sound for more than 35 years. He began his career at the BBC, firstly in Network Radio (where he had the dubious distinction of being amongst the original 'Steve Wright in the Afternoon' Boys), and then a Studio Sound Supervisor in BBC Television at Lime Grove Current Affairs Centre when the first PSC units were established.

During a period of working within BBC News he was present at the fall of the Berlin Wall, the Tiananmen Square massacre in China, the Lockerbie bombing and narrowly avoided being blown up by an RPG in Afghanistan in the company of Kate Adie. As he moved more into Documentary and factual work he spent several years working for Newsnight and then joined BBC Crew Shop, a sort of 'in-house' freelance unit, where he worked on many programmes such as Blue Peter, The O'Zone, The Money Programme and Panorama. In 2002 after 22 years he left the BBC to go freelance and has continued to work on numerous factual and documentary programmes, especially Science, History and Arts genres ever since.

He is trusted to work with some of the most important dignitaries including Presidents, Prime Ministers and members of the Royal Family as well as A-list Talent and Celebrities.

He's helpful, hard-working, co-operative and courteous and more than happy to assist a Cameraperson or a self shooting Producer/Director whenever necessary.

Thanks Audio Ltd for A10 Demo Units